HomeΑΠΟΚΑΛΥΨΕΙΣRussia’s 25,000-troop allowance & other facts you may not know about Crimea
ΑΠΟΚΑΛΥΨΕΙΣΔΙΕΘΝΗ

Russia’s 25,000-troop allowance & other facts you may not know about Crimea

Ukraine’s statement at the UN that ‘16,000 Russian soldiers had been deployed’ across Crimea sparked a MSM feeding frenzy that steadfastly ignored any hard facts that got in their way. Especially unwelcome is the fact that the so-called ‘invasion force’ has been there for 15 years already. The media many trust described in hysterical tones how the Autonomous Republic of Crimea was under a full-scale Russian invasion with headlines like: “Ukraine says Russia sent 16,000 troops to Crimea”,“Ukraine crisis deepens as Russia sends more troops into Crimea,” as well as “What can Obama do about Russia’s invasion of Crimea?”. Facts, and ardent statements by top Russian diplomats were totally ignored by the western ‘war press’. Russian UN Ambassador Vitaly Churkin pointed to the longstanding 25,000 troop allowance while FM Sergey Lavrov stressed the Russian military “strictly executes the agreements which stipulate the Russian fleet’s presence in Ukraine, and follows the stance and claims coming from the legitimate authority in Ukraine and in this case the legitimate authority of the Autonomous Republic Crimea as well.” So here they are, the facts:

1) A Russian naval presence in Crimea dates to 1783 when the port city of Sevastopol was founded by Russian Prince Grigory Potemkin. Crimea was part of Russia until Nikita Khruschev gave it to Ukraine in 1954. 2) In 1997, amid the wreckage of the USSR, Russia & Ukraine signed a Partition Treaty determining the fate of the military bases and vessels in Crimea. The deal sparked widespread officer ‘defections’ to Russia and was ratified by the Russian & Ukrainian parliaments in 1999. Russia received 81.7 percent of the fleet’s ships after paying the Ukrainian government US$526.5 million. 3) The deal allowed the Russian Black Sea Fleet to stay in Crimea until 2017. This was extended by another 25 years to 2042 with a 5-year extension option in 2010. 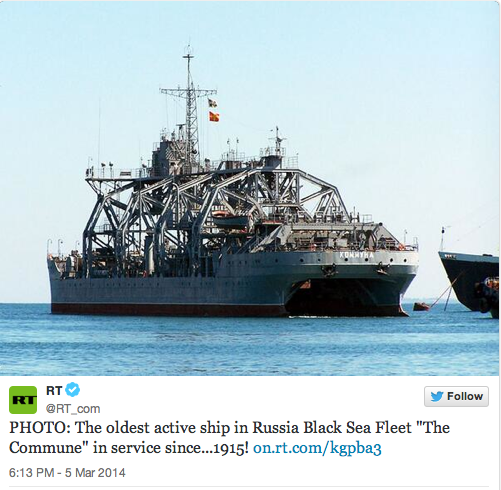 4) Moscow annually writes off $97.75 million of Kiev’s debt for the right to use Ukrainian waters and radio frequencies, and to compensate for the Black Sea Fleet’s environmental impact. 5) The Russian navy is allowed up to – 25,000 troops, – 24 artillery systems with a caliber smaller than 100 mm, – 132 armored vehicles, and – 22 military planes, on Crimean territory. Ukrainian marines look at a Russian ship floating out of the Sevastopol bay on March 4, 2014 (AFP Photo / Viktor Drachev) Servicemen participate in a joint parade of Ukraine’s Navy and the Russian Black Sea Fleet in Sevastopol on Navy Day.(RIA Novosti / Vasiliy Batanov)

8) Russian coastal forces in Ukraine consist of the 1096th Separate Anti-Aircraft Missile Regiment in Sevastopol and the 810th Marine Brigade, which hosts around 2,000 marines. 9) Russian naval units are permitted to implement security measures at their permanent post as well as during re-deployments in cooperation with Ukrainian forces, in accordance with Russia’s armed forces procedures. Authorities in the Ukrainian Autonomous Republic of Crimea – where over half the population is Russian – requested Moscow’s assistance after the self-proclaimed government in Kiev introduced a law abolishing the use of languages other than Ukrainian in official circumstances. Last week, Russia’s Federation Council unanimously approved President Vladimir Putin’s request to send the country’s military forces to Ukraine to ensure peace and order in the region “until the socio-political situation in the country is stabilized.” However, the final say about deploying troops lies with Putin, who hasn’t yet made such a decision, stressing that deploying military force would be a last resort. The ship parade during the celebration of the Russian Black Sea Fleet’s 230th anniversary in Sevastopol.(RIA Novosti / Vasiliy Batanov)