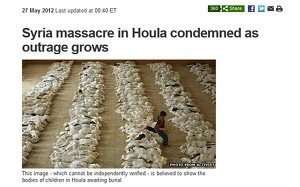 The BBC is facing criticism after it accidentally used a picture taken in Iraq in 2003 to illustrate the senseless massacre of children in Syria.

Photographer Marco di Lauro said he nearly “fell off his chair” when he saw the image being used, and said he was “astonished” at the failure of the corporation to check their sources.

The picture, which was actually taken on March 27, 2003, shows a young Iraqi child jumping over dozens of white body bags containing skeletons found in a desert south of Baghdad.

Secretary of State John Kerry opened his speech Friday by describing the horrors victims of the chemical weapon attack had suffered, including twitching, spasms and difficulty breathing. Attempting to drive the point home, Kerry referenced a photograph used by the BBC, illustrating a child jumping over hundreds of dead bodies covered in white shrouds. The Secretary of State forgot to mention, however, that this photo was taken during US intervention in Iraq back in 2003.

The photo which was later retracted was meant to depict victims who allegedly succumbed to the effects of chemical weapons launched by Assad’s regime.

However, it was later exposed that the photograph used had been taken in 2003 in Iraq.

The Secretary of State announced the US will continue “negotiations” with Congress and the American people.

The decision came after the UK Parliament voted against military action in Syria on Thursday evening, refusing to accompany the US in a missile strike against the Middle Eastern nation.

Germany also voiced opposition to a Syrian military intervention saying they have “not considered it” and “will not be considering it”.

France, however, released statements saying they intend to act alongside the US in an attempt to “punish” Syria for the alleged chemical weapons attack.

Despite numerous allies’ refusal to get involved, Kerry argued “Many friends stand ready to respond”.

Kerry alleged that not just one, but several chemical weapon attacks have occurred. The attack last week in the Damascus suburb of Ghouta killed 1,429 Syrians, including 426 children. However, Infowars reveals that the “international aid group, Doctors Without Borders, reported 355 people were killed in the attack last week, not the wildly exaggerated figure cited by Kerry”.

The Secretary of State said the US government has “high confidence” Assad carried out the attack, affirming military intervention would be “common sense”.

He referred to the attack as an “indiscriminate, inconceivable and horrific act,” claiming a Syrian senior regime official admitted responsibility. However, he offered no hard evidence backing this claim.

On Friday Secretary of State Kerry claimed that US intelligence concluded the Assad government is responsible for the chemical attack in Damascus on August 21. Kerry said that the evidence the US has is “clear and compelling” but did not offer and proof. Kerry also added that any action that Barack Obama might decide to take will be limited. “We know there is no ultimate military solution. It has to be political,” Kerry said.

According to Kerry, the US knows “where the rockets were launched from and at what time. … We know where they landed and when.”

Kerry claims that 1,429 people were killed in the attack, including 426 children, and said the assessment was based on “multiple” streams of intelligence.

The Assad regime has consistently denied it was responsible.

“Our intelligence community has carefully reviewed and re-reviewed information regarding this attack,” Kerry said, referring to last week’s alleged chemical strike outside Damascus.”It’s done so more than mindful of the Iraq experience. We will not repeat that moment.”

As Kerry spoke, the White House sent reporters a “unclassified” summary of the US intelligence community’s “assessment of the Syrian government’s use of chemical weapons on Aug. 21, 2013.”

It says, in part that:

“The United States Government assesses with high confidence that the Syrian government carried out a chemical weapons attack in the Damascus suburbs on August 21, 2013.”

“A preliminary U.S. government assessment determined that 1,429 people were killed in the chemical weapons attack, including at least 426 children, though this assessment will certainly evolve as we obtain more information.”

“We have intelligence that leads us to assess that Syrian chemical weapons personnel – including personnel assessed to be associated with the SSRC – were preparing chemical munitions prior to the attack.” 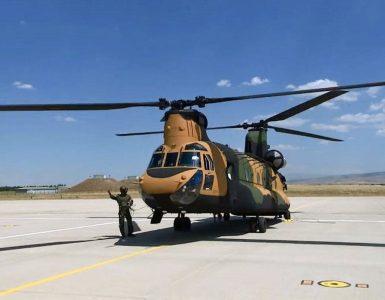 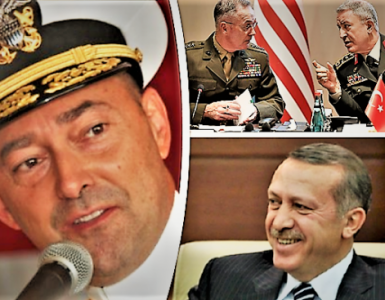