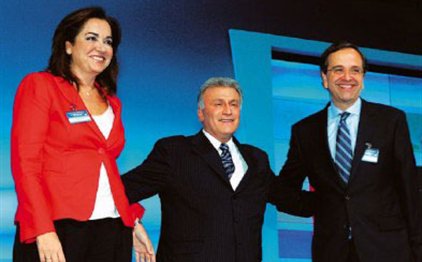 1.(SBU) Following the New Democracy (ND) party´s defeat in Greek
parliamentary elections October 4 (with the lowest percentage of
votes in ND´s history), the party is heading into the election of a
new leader to replace former Prime Minister Kostas Karamanlis with
very low morale and in considerable uncertainty over internal party
dynamics after a long period of stability. Even the procedures for
the election are unclear, with all the candidates agreeing to
jettison written party rules that would have authorized a party
conference to choose the new leader November 7. Instead, it
appears likely the conference will establish procedures for a
direct election of the leader by party members in December, with a
provision for a second round if no one gets a majority in the first
round.

2.(SBU)The leading candidate is former Foreign Minister Dora
Bakoyannis, who has long been seen as the heir to the ND throne.
The unsettled situation in the party may make her vulnerable to an
upset, however, with polls suggesting her strongest challenger is
the more conservative and nationalistic former Culture Minister
Antonis Samaras. The third-place candidate, former Health Minister
Dimitris Avramopoulos, is the only one who could conceivably step
into a middle-ground position between the other two major
candidates, and perhaps play the role of a kingmaker. End
Summary.
EMERGENCY PARTY CONGRESS:

3.(SBU) Karamanlis called an emergency party congress for November
7 to elect his successor as party leader. Soon thereafter,
however, all the leading candidates agreed (in Bakoyannis´s case,
only after significant pressure from her rivals) to an election
that would be open to all ND members. Avramopoulos with guarded
support from Samaras and marginal candidate Psomiadis has suggested
allowing “friends of New Democracy” to vote, muddying the waters
further. Because there is no provision in party rules for such an
election, the November 7 conference now appears likely to establish
the procedures. Although nothing has been finalized, the following
scenario has been proposed: During the meeting, the participants
will amend the party´s constitution so that all party members could
take part in a vote to elect a new leader. On December 6, ND would
open 1,200 polling stations around the country; some 350,000 ND
card-carrying members are on the rolls. If “Friends” of ND are
allowed to vote, they would fill out a membership application on
the spot and pay a symbolic application fee of 2 euros. For an
outright win in the election, a candidate must score 50 percent
plus one; in case of no win on the first ballot, a second round
will follow, the candidate who is first past the pole wins the
election. A runoff is tentatively planned for December 13 if there
is no clear winner.

4.(SBU) The conventional wisdom is that the compressed time frame
of the election favors Bakoyannis due to her connections with the
media, financial ties, and factional support that she has built up
over the years. But other factors characterizing the race may work
against her. ND supporters have seen their party´s popularity fall
over the last year while the far-right LAOS party has gained at
their expense. Many party members may conclude that a nationalist
like Samaras could better protect the party´s weakening right
flank. Perhaps even more important is the internecine dynamics of
ND clan politics. Bakoyannis is the daughter of former Prime
Minister (1990-1993) and ND party leader (1984-1993) Constantine
Mitsotakis, and the Mitsotakis family has long been seen as a rival
ATHENS 00001587 002.2 OF 004
to (and distrusted by) the Karamanlis family dynasty. Many
Karamanlis supporters are eager to find a credible alternative to
handing the party over to the Mitsotakis family. Polls published
in the Greek media in late October suggest Bakoyannis probably does
not have enough support to won an outright majority in the first
round, and a second round could potentially provide an opportunity
for all her opponents to unite against her.

5.(C) This assessment largely jibes with that of ND insider and
former Deputy Minister of Finance Peter Doukas, as outlined in a
conversation with POL Counselor October 22. Doukas suggested the
election defeat, the uncertainty over the future, and the departure
of the Karamanlis brand name had created an identity crisis in ND,
and the fierce internal campaigning by the leadership candidates
was aggravating it. Doukas said the tension was no longer confined
to the top of the party, but was percolating down and sowing
division at the local levels. Although Doukas was careful to not
declare his support for any candidate, and he agreed that
Bakoyannis was ahead of her rivals, he cautioned that Samaras was a
significant threat to her. Doukas himself, who was linked to the
Vatopedion real estate scandal, is biding his time within ND and
focused on reviving Embros, a think tank created by his
father-in-law, former ND leader Miltiadis Evert. Doukas wishes to
make Embros a significant think tank with a market-oriented
economic perspective, something he believes will become
increasingly salient as the new PASOK government of George
Papandreou stakes out what Doukas sees as anti-market positions in
response to the global recession.
THE CONTENDERS:

6.(SBU) Former Foreign Minister Dora Bakoyannis, born in Athens in
1954, was the first female Mayor of Athens in the history of modern
Greece. She has served with the Ministry of Economic Coordination
working for the Department of European Economic Community (EEC)
Affairs (1977); served as the Chief of Staff for ND leader (and her
father) Kostantinos Mitsotakis (1984-1989); was a member of
Parliament for Evrytania, the constituency of her late first
husband, the journalist and scholar Pavlos Bakoyannis, following
his assassination by the terrorist group November 17
(1989,1990,1993); was the Minister for Culture (1992); a member of
Parliament for the Athens 1st Electoral District (1996,2000,2007);
has served as Mayor of Athens (2002-2006); and was the Minister of
Foreign Affairs from February 2006 until October 2009.

7.(SBU) She announced her candidacy with a message of unity and a
promise of modernizing the party. She is widely considered more
moderate than other ND candidates ,especially on foreign policy.
While this (and her successful tenure as OSCE Chair-in-Office
through most of this year) have won her some supporters, it also
leaves her open to criticism that she has not sufficiently
protected Greek interests on hot-button issues like Cyprus,
Greek-Turkish relations, energy cooperation between Greece and
Russia, and the Macedonia name, during her tenure as Foreign
Minister. In fact, she has not made her foreign policy experience
a major part of her campaign.

8.(SBU) Former Culture Minister Antonis Samaras, born in Athens in
ATHENS 00001587 003.2 OF 004
1951, is a Greek politician and former Member of the European
Parliament for New Democracy; part of the European People´s Party.
He was Greek Minister for Foreign Affairs in the New Democracy
government of Konstantinos Mitsotakis (1989-1992). He was ousted
from this position after a disagreement regarding the Macedonia
name issue in which he believed Mitsotakis´ handled the issue too
softly. (Comment: In many ways it was Samaras who elevated the name
issue to its status as the third rail of Greek politics. End
Comment.) After resigning from parliament for 6 months and
separating from New Democracy, he reemerged with his own political
party, “Political Spring.” Political Spring was successful in
gaining slight representation from 1992 up until the 2000 election,
where it did not participate. Samaras gave his support to New
Democracy during this time and in 2004 Samaras rejoined ND and was
elected as a MEP in the 2004 European elections. In the 2007 Greek
legislative election he was elected to the Greek Parliament for
Messinia, and consequently resigned from the European Parliament.
In January 2009 he was appointed Minister for Culture.

9.(SBU) Samaras has been concentrating on winning support from ND´s
youth and student leagues and has been making inroads in northern
Greece, in particular. He is considered much more conservative than
his opponents, especially Bakoyannis. Samaras hopes to have the
support of the Karamanlis clan and its allies, who would like to
find an alternative to the Mitsotakis clan represented by
Bakoyannis. In fact, there have been rumors ever since Samaras was
brought back into the government in early 2009 – after a long
period of exile from top posts – that the Karamanlis faction was
grooming him for precisely this role. Certainly there is no risk
that Samaras would enter into any kind of deal with Bakoyannis: the
two have been bitter personal rivals as a result of Samaras´s role
in bringing down PM Mitsotakis´s government.

10.(SBU) Former Health Minister Dimitris Avramopoulos, born in
Athens in 1953, has had a long diplomatic and political career. He
has served as a Career Diplomat to the Ministry of Foreign Affairs
in Athens (1980-1993); was Consul of Greece in Liege and Special
Diplomatic Advisor to the President and Leader of ND, Costas
Mitsotakis (1988-1992); served as the Official Spokesman of the
Ministry of Foreign affairs in Athens and was Consul General of
Greece to Geneva (1992); and was appointed Director of the
Diplomatic Office of the Prime Minister of Greece (1993). In 1993,
Avramopoulos resigned from the Greek Diplomatic Service to enter
the political arena. As a member of ND and he was elected member of
the Central Committee, was elected Deputy Member of the Greek
Parliament (1993-1994) and served as Mayor of Athens (1994-2002).
In 2001, Avramopoulos founded the short-lived and right-of-center
“Free Citizens Movement (KEP) party.” After its disbandment in
2002 by Avramopoulos KEP continued to operate as a think tank and
Avramopoulos rejoined New Democracy. In 2004 with New Democracy in
power, Avramopoulos took the office of Minister of Tourism (2006)
and as Minister of Health and Social Solidarity (2006-2009).

11.(SBU) Avramopoulos is generally seen as an ambitious and
media-savvy politician, not known for strong principles or lasting
alliances within ND. But KEP´s short-lived popularity was
attributed to Avramopoulos´ personal appeal; this charisma could
give him some hope in securing the bid. He also appears to be the
most likely to strike a deal with his opponents. ) Avramopoulos,
in contrast to Samaras, has longstanding ties to the Mitsotakis
family, although his political course has taken him in several
other directions over the years, and he is appealing for the
support of Karamanlis supporters against Bakoyannis in the current
contest.

PANAGIOTIS PSOMIADIS:
ATHENS 00001587 004.2 OF 004
12.(SBU) The least-known candidate in the race, Panagiotis
Psomiadis, ND-affiliated prefect of Thessaloniki, was the first to
announce candidacy for the post. He was elected to the Thessaloniki
city council with ND affiliation (1982); a member of parliament
(1990, 1993, 1996,2000); and a prefect of Thessaloniki (2002,
2006). Psomiadis said he was taking a front seat and contesting the
ND leadership, but left open the prospect of eventually backing
some other major candidacy that would convince him it represents
“the platform of the broad center-right.” Psomiadis is also
considered a hardliner on the Macedonia name issue. Little
attention has been given to Psomiadis, making his chances at
successfully grasping the leadership spot unlikely.
Speckhard
;2009-10-29 12:59 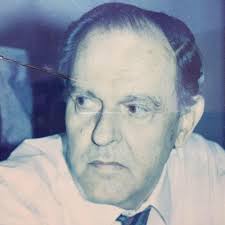 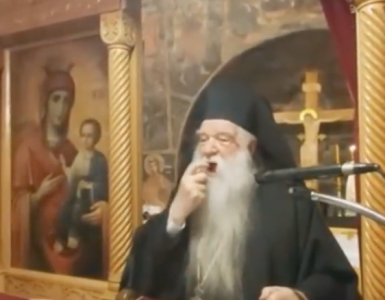